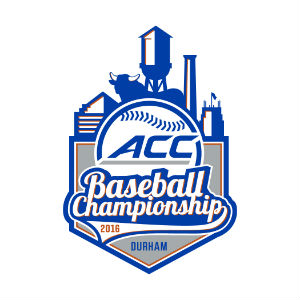 The No. 7-ranked UVA baseball team used a seven-run outburst in the fifth inning to earn a 7-2 win over No. 3 Louisville Saturday evening in the final game of pool play in the ACC Baseball Championship at Durham Bulls Athletic Park in Durham, N.C. Seeded No. 3 in the field, the Cavaliers (37-20) held the second-seeded Cardinals (47-12) to a season-low four hits.

“I felt like this win tonight and the effort that our guys gave and their execution that we had tonight was as good as I’ve seen us all year,” O’Connor said. “That was as impressive of a win as I’ve seen this team have all season, and we’ve had some big ones. I say that just because of certainly the situation in the tournament. We had played two ballgames and lost both by one run to good opponents. You’re facing an outstanding pitcher and an outstanding team, and our guys weren’t denied to come out and play really good, sound baseball. Certainly we know we have a very good ballclub, and we played like it tonight, and I’m just as proud of this team as I have been for any game this season.”

Virginia starting pitcher Adam Haseley (So., Windermere, Fla.) worked five innings, allowing a run, two hits and five walks while striking out four. He earned the win to improve to 9-3 on the season. UVA relievers Tyler Shambora (Jr., Venice, Fla.), Daniel Lynch (Fr., Henrico, Va.) and Tommy Doyle (So., Vienna, Va.) combined to allow a run and two hits over the final four innings to finish off the win.

Louisville starter Drew Harrington was roughed up for seven earned runs and nine hits over 4 1/3 innings. The 2016 ACC Pitcher of the Year took the loss and dropped to 11-2 this season.

Virginia picked up nine of its 10 hits in the big fifth inning. Pavin Smith (So., Jupiter, Fla.) led UVA with a pair of hits, while all nine starters had a least one hit. The Cavaliers once again were solid on the defensive end and did not commit an error in three games in the tournament.

After Harrington allowed only one hit and faced the minimum over the first four innings, Virginia exploded for all seven of its run on nine hits in the fifth inning. The first six Cavaliers and nine of the first 10 reached base via hits. Smith led off with a single and moved to third on a Daniel Pinero double. Haseley and Charlie Cody (So., Chesapeake, Va.) hit back-to-back RBI singles before Jack Gerstenmaier (So., Richmond, Va.) singled in a pair. After a Cameron Simmons (Fr., Royersford, Pa.) single and a Harrington balk put runners on second and third, Ernie Clement (So., Rochester, N.Y.) hit a sac fly to left for the first out of the inning and a 5-0 lead.

Justin Novak (So., Tokyo, Japan) hit an infield single before Matt Thaiss (Jr., Jackson, N.J.) singled in a run to knock Harrington from the game, extending his hit streak to a career-long 16 games, longest at UVA since Tyler Cannon in 2010. Reliever Lincoln Henzman then gave up Smith’s second single of the inning, with Novak scoring.

Louisville sliced a run from the lead in its half of the fifth on a one-out RBI single from Logan Taylor. The Cardinals cut the lead to 7-2 with one out in the seventh when Corey Ray launched a towering fly ball that landed in the first row of seats in right field for his 15th home run.

Virginia will learn its NCAA tournament fate Sunday and Monday. The 16 regional host sites will be unveiled beginning at 8:30 p.m. Sunday on the NCAA Baseball’s Twitter account (@NCAACWS) and Facebook page. The field of 64 for the tournament will be announced at noon Monday on ESPNU.