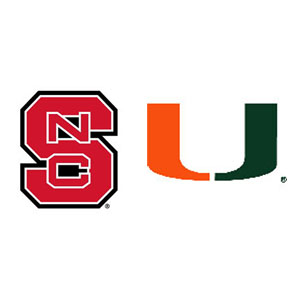 The big blow came after another Miami miss. Turner hit a three from the left wing with 1:46 to go to extend the lead to five at 58-53.

The Wolfpack closed out the game hitting five of its eight free-throw attempts in the final 1:11.

NC State opened the game on a 10-2 run in the first 4:24 before Miami clamped down on defense to get back into the game, trailing 26-22 at the half.

NC State led by as many as eight points in the second half before Miami rallied to lead 53-51 with 3:52 to go on a three-pointer by Davon Reed.

The Hurricanes (17-16, 8-12 ACC) would not score again until the 22-second mark on a jumper by Rion Brown with the outcome already having been decided.

Warren had 24 points and eight rebounds for NC State, which advances to Friday’s ACC Tournament quarterfinals against #2 seed Syracuse (27-4, 14-4 ACC).