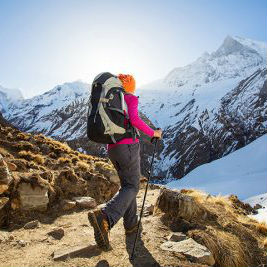 Safety outdoors is important whether you’re running, hiking, camping, or just going for a walk. While it’s not healthy to become overly concerned to the point of paranoia, it’s always a good idea to take the following precautions to stay as safe as possible.

If you’re the adventurous type who likes to take off on a whim, consider telling someone before you go. People have found themselves in all kinds of tragic situations that could have been prevented if someone knew they were missing. For instance, one man had his arm trapped by a boulder and after realizing nobody was coming to save him, made the impossible decision to cut his own arm off to escape.

Garmin has done it again. The company has revolutionized the way GPS is used in daily life and has come out with a variety of GPS smart watches with some advanced features. For instance, the Forerunner 45 and 45s are perfect for runners. These watches track all running, cycling, and workout activities and still function as a basic smart watch.

Perhaps the best part about Garmin’s new smart watches is the added “incident detection” that will alert emergency contacts to the wearer’s location during certain activities or at your discretion. This is revolutionary because if you find yourself in an unsafe situation, you can essentially push a button to send out an SOS to your emergency contacts and they’ll know exactly where you are.

In today’s technologically-advanced world, few things are done manually. Everything is shifting into electronic form, including basic maps and compasses. While digital maps and compasses are extremely helpful, they aren’t failproof.

If you’re a AAA member, you can grab some paper maps before you head out for your adventure. You can even photocopy key parts of the map and keep the copies in your wallet so you don’t have to drag around a giant map.

The whole point of checking in with someone daily is to make sure someone knows when you might need help. It’s not enough to tell someone where you’re going if you’re going to be gone for a week or two. If all you do is tell someone you’re going away for 7 days and you run into trouble on the second day, nobody will know anything’s wrong until you don’t show up five days later.

Say you’re out in the wilderness going for daily hikes and you break a leg, get stuck, or lose your way. Without a check-in buddy, nobody will know something’s wrong until it’s too late. If you have an agreement to check in with someone on a daily basis, and you don’t check in, that person can immediately alert the authorities to go find you as soon as they know you need help.

Nobody wants to think they might be targeted by someone while out running or enjoying the outdoors, but the truth is it happens too often. Many women have been attacked while running and basic self-defense skills are a requirement.

A blogger from Life Hacker has several ideas for effective self-defense, including a graphic of the most effective body parts to hit when fending off an attacker. There’s also a video depicting how to defend yourself against the three most common attacks and several more helpful videos.

Be safe, but don’t live in fear

It’s important to take safety precautions, but don’t live in fear. Nobody can predict what’s going to happen and if you live your life in fear, you’ll miss out on actually living. Do the best you can to make safe, smart choices and empower yourself with the skills of self-defense that one day might save your life.