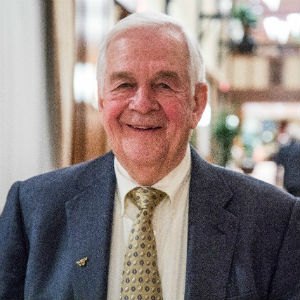 When Virginia Tech electrical engineering alumnus Joe T. May ’62 was in high school, he says he wasn’t exactly on a successful path. After a suspension for smoking cigarettes — something that today, May said, “wouldn’t raise an eyebrow,” but did then in the small Mennonite community he lived in — May’s principal allowed him to graduate only if he promised “to do something useful” with his life.

So he joined the Army, where he was exposed to electronics. He got out of the service and enrolled at Virginia Tech to learn more, eventually earning his electrical engineering degree, but not without help along the way.

“A couple of people in small ways were very helpful in getting me on track and allowed me to end up getting an engineering degree from Virginia Tech and, frankly, ending up with a career that’s been very satisfying to me and I think helpful in general,” May said.

It’s one of the reasons May and his family — including his wife, Bobby, and two daughters, Virginia Tech alumna Elaine and University of Virginia alumna Beth — have gifted the College of Engineering $5 million from the May Family Foundation to establish a multiyear program that aims to increase the number of first-generation students who enroll at and graduate from Virginia Tech. The Mays had previously endowed two electrical engineering scholarships in memory of their son Philip A. May ’89.

“As we move forward in our collective visioning of the College of Engineering, we know we must continue to make attending Virginia Tech engineering more accessible,” said Julia M. Ross, Paul and Dorothea Torgersen Dean of Engineering at Virginia Tech. “The May family’s gift will expand our ability to recruit and retain first-generation students to engineering. To address society’s greatest challenges, we need to attract the best students from all backgrounds and areas of the commonwealth. We could not be more thankful and excited about the possibilities that the gift allows the college and our incoming students.”

Starting this year, the May Family Foundation Pathway for 1st-Generation Students will begin its first round of student selections. Virginia Tech will recruit 60 promising first-generation students from Virginia who show exceptional promise and have the ability to succeed.

“I concluded over the years that there are a lot of young people out there who are really, really capable,” May said, “but for whatever reasons they aren’t quite on the right track and that perhaps a modest amount of assistance from us might make a difference in their life — as it made in mine.”

The May Family Foundation’s gift comes at a time when College of Engineering Dean Ross, who began her tenure at Virginia Tech in July 2017, has enhanced the focus on “inclusive excellence” — her term for supporting all students to succeed in meeting the high standards of Virginia Tech engineering.

“I think the timing is excellent because Dean Ross comes with a lot of new ideas and a receptive mind, and we’re presenting what we hope and think are some new, good ideas and it appears to have every chance of synergy,” May said. “It’s been a genuine pleasure to work with the Virginia Tech people in pulling together what’s a pretty new and different program.”

What the gift funds

Once selected, the students will connect with the College of Engineering at Virginia Tech through four programming sessions.

The summer after their freshman year of high school, the selected students will be invited to spend two weeks on Virginia Tech’s campus for the first session. They will receive a hands-on introduction to engineering disciplines through lab tours and inVenTs Studios, which are makerspaces located in the engineering living-learning community in Lee Hall. Students will also learn about college preparation and planning and will be exposed to different majors at Virginia Tech.

Later that academic year, the students will be invited back to campus for the spring football game, where they will participate in the RISE Spring Game Event — an existing program that targets students from the Southside, Tidewater, and Northern Virginia regions.

During the second session, the same cohort of students will return to Virginia Tech for a second summer camp the summer before 11th grade. The focus of this session will include mentoring the students and SAT preparation. Students will also return in the spring for the annual Engineering Open House.

For the third session, the students will return prior to entering their senior year of high school for the program’s final summer camp. This session will include mentoring, as well as providing instructions on college applications, scholarships searches, and scholarship applications.

Additionally, this summer camp will have a special session for the parents of first-generation students, which will prepare them for the college application process.

Students in their senior year of high school will return to campus and participate in Fall Visitation. There, they will have the opportunity to submit their applications and find out their admission status.

In the spring, students may attend three exclusive events for students who have been offered admission to the College of Engineering: Hokie Focus, Gateway, and Women’s Preview Weekend.

For the fourth and final session, matriculating students will attend the STEP Summer Bridge Program at no cost. This five-week engineering boot camp reinforces foundational courses, such as chemistry and math, and teaches students study skills that prepare them for the rigor and intensity required of first-year engineering students.

During the academic year, these students will live in the Hypatia and Galileo living-learning communities, which bring together female and male first-year engineering students in a residential environment and provides encouragement and support in their pursuit of engineering careers. The graduation rate for first-generation students who participate in such residential programs is approximately 85 percent, significantly higher than the 60 percent graduation rate for those who have a traditional dorm experience.

Students will have the opportunity to participate in the Rising Sophomore Abroad Program, which is a two-week study abroad program with a small group experience. In addition, participants will receive a $1,500 scholarship to support their own experiential learning opportunity while at Virginia Tech.

Such opportunities are designed to provide students with high-impact exposure and experiences, increasing their competitiveness for internships, co-ops, and job placement.

Over the duration of a five-year pilot, this program should provide 300 students with the gateway to successfully pursue engineering degrees.

May was born in 1937 in the community of Coote’s Store. He increased the town’s population to a burgeoning 39 when it welcomed Joe Turner May into the world as a sixth-generation Virginian. Born on his parents’ 300-acre farm on the north end of Rockingham County, Joe humbly entered the world as the oldest son among six siblings.

In fifth grade, his mother was his school teacher, and later, when May was first elected to public office, she would tell a Washington Post reporter her son “was quite a handful.” He displayed much curiosity early in life, helping his sister Lois with her high school chemistry while he was still in sixth grade, but as he followed her into Broadway High School, he said he “did not distinguish” himself academically.

Consequently, after graduation he enlisted in the Army, and spent three years there, all stateside, including a year of electronics school. Afterward he was assigned to a guided missile outfit in Alabama, giving him an insight into the workings of German-born scientist Wernher von Braun, who became an American citizen and is often considered the premier rocket engineer of the 20th century. His Army stint also took him to Cape Canaveral, Florida, and these experiences guided May’s career choice of engineering.

In 1958, he entered Virginia Tech, “one of the turning points of my life,” May said.

To offset expenses, May became a resident counselor in the dormitory, earning some two-thirds of his room, board and tuition of $735 a year. He also served on the university’s Honor Court. In 1962, he was awarded his degree in electrical engineering, and he was off to a career that would eventually have him labeled as the “Thomas Jefferson of the Virginia General Assembly.”

“At Virginia Tech, I learned a great number of the lessons I needed to succeed. I never worked harder, and I competed for grades. In the summers, I interned at Johns Hopkins University Applied Physics Laboratory. I felt competitive with the interns from other schools like Georgia Tech and MIT. Virginia Tech’s engineering program is as good a balance as one can get. It’s pretty darned practical and a true learning experience,” May reflected.

May eventually settled in on E.I. DuPont de Nemours and Co. in Wilmington, Delaware. A recruiter lured him to the First State and home of one of the world’s largest chemical companies, where he stayed for more than six years, earning his first three patents — the best known of which is the instrument for measuring octane on gasoline pumps. Today, May holds 27 patents.

In 1968, May switched into a sales position, selling equipment for Electronic Marketing Associates. After two years, he seized the opportunity to help found an engineering and research firm, Ensco Inc., located in Springfield, Virginia. While at Ensco, May added two more inventions to his collection, the Sigma Signer, a signature reproduction machine still in use today, and an instrument to measure the curvature of railroad tracks, which remains a standard in the railroad industry.

The latter patent provided May with tremendous satisfaction. On what he described as “a hot miserable July day in Burke, Virginia,” when he was part of a survey team running a string line and “performing thousands of deep knee bends,” May decided there had to be a better way to collect the data. His imagination resulted in a new measuring instrument that allowed future survey teams to cover some 500 miles of railroad track in a day as opposed to previous two miles per day by string.

As he continued knocking on and opening doors, May knew In the back of his mind he was headed toward starting his own business. In 1977, he opened the doors of Electronic Instrumentation and Technology (EIT) in Sterling, Virginia.

With an $83,000 contract from DuPont, May, his wife, and a professional friend started EIT on the kitchen table. He also had a solid retainer from another client. May had intended to be an absentee owner, but within six months, he knew he faced a choice of making EIT a real business or a sideline. The Mays opted for the long-range option, and today they own a $40 million-a-year company with additional facilities near Danville, Virginia.

May continues as the chairman of the board and the chief technology officer of the 250-plus employee company and conducts business in some 33 countries worldwide. Bobby, who is corporate secretary, continues to work at EIT.

In 1993, May ran his first successful campaign for elected office, joining the Virginia House of Delegates as the representative of Clarke and part of Loudoun counties, serving from 1994 – 2014.

May has been honored with numerous accolades, including: