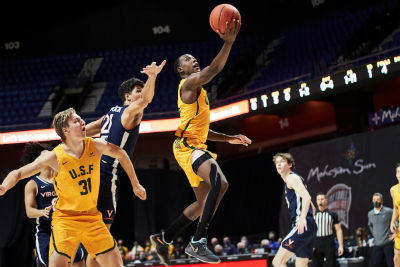 Wednesday, Virginia scores 89, wins going away, it’s easy to be that team. Friday, you can’t buy a bucket, the opponent hits 13 threes, runs backdoors like Dean Smith is on the sidelines.

You still have the last shot, off the fingertips of your best shooter, it goes, you win.

It didn’t go – Sam Hauser’s missed three inside of a second to go left San Francisco a 61-60 winner.

Credit where credit is due: the Dons, which won 22 games and lost by four in the West Coast Conference tournament championship game a year ago, and were looking for a program-defining win, earned it.

Today, they did just about everything right.

Coach Todd Golden, on basically no time, since he also had a game on Thursday, a 79-68 win over Towson, drew up a smart game plan to attack the Virginia Pack-Line – basically going five-high, reminiscent of, dare I bring up these letters, UMBC.

The five-high spread out the Pack-Line, had Virginia chasing, opening up backdoor cuts for layups and kickouts for open threes.

And in the second half, it was, well, golden.

San Francisco scored 40 points on 29 second-half possessions, shooting 15-of-29 from the floor, 9-of-15 from three-point range.

Virginia, on a day where it felt like nothing was going right, fought back, with a Reece Beekman driving layup, a pair of free throws from Kihei Clark and then a strong finish from Justin McKoy with 31 seconds left getting the margin back to one.

Josh Kunen missed the front end of a one-and-one with 10 seconds left, setting up the final play for Virginia, which ran through Clark, to Jay Huff at the top of the key, who looked for Hauser coming off a down screen.

Hauser had made his last four shots, beginning with a short jumper with 7:45 to go.

This one never had the look, and that would be it.

Two days ago, UVA shot 15-of-29 from three-point range. The game plan for Friday seemed to be, attack the rim, and while the Cavaliers got plenty of point-blank shots, the Dons were able to contest them into an 8-of-22 stat line on those looks.

Not sure why, but Virginia shot just 12 balls from three, making three.

Trey Murphy III, who was 6-of-8 from deep on Wednesday, attempted just one on Friday, and finished 0-of-6 from the floor, his four points coming from the foul line.

Jay Huff had 14 points on Wednesday; on Friday, he had four, and was just 1-of-2 from the floor.

Hauser’s lack of experience in the Pack-Line was made obvious by the way San Francisco kept running back doors opposite him to get easy look after easy look in the second half.

The poor defensive showing from Clark, who was burned by Dons guard Jamaree Bouyea (19 points, 8-of-15 shooting, six assists, no turnovers in 35 minutes), was a surprise.

Add it up, and their performance on the defensive end alone was a difference in this game.

Per StatBroadcast, Clark was responsible for 11.9 San Francisco points, and Hauser 10.9, and Hauser had a team-low plus-minus of -8.

The way this one played out reminded me of the early-season loss at George Washington in November 2015.

As was the case today, that GW game involved a team that didn’t seem like it could miss, and a Virginia team that felt the pressure as the game wore on, and played like it down the stretch.

Nobody likes a loss, but you’ve got to take your whuppin’ and learn from it.

Virginia came out flat in the first half. Last time I saw a Virginia team this flat was … that UMBC game.

They led by seven early in the second half, before allowing an 11-0 run.

Then got up five, and Clark fouled a three-point shooter, on a shot that somehow went in.

Then they got down seven with 2:11 to go, when they weren’t getting stops, and they got stops, got back into it, and had a chance to win at the buzzer.

Fans don’t like to hear this, but the lessons learned today will help in March and April.

This Virginia team is good, but it’s not good enough that it can come out flat, can’t play D in the second half, and still get the W.