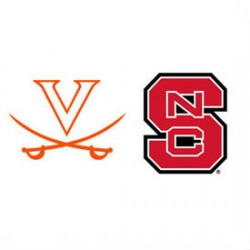 UVA took control from there as it did all night, with defense. The Pack had come in off back-to-back wins over then-#2 Duke and #19 Clemson, averaging 87 points per game over that stretch, but could get nothing going Sunday night, shooting 41.1 percent from the floor and connecting on just 2-of-16 from three-point range.

Sophomore forward Omer Yurtseven, who had averaged 22.5 points per game in the wins over Duke and Clemson, had six points on 3-of-8 shooting in 25 minutes.

Hall had a cooly efficient 25 points to lead Virginia, shooting 7-of-9 from the floor, 4-of-5 from three-point range and 7-of-7 at the free-throw line.