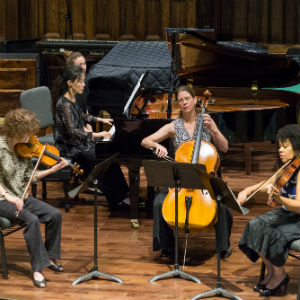 Works of Bach and Telemann open the festival, and then the musicians traverse through the ages with iconic works of Beethoven, Vaughan Williams, and William Walton. The centerpiece of the festival is a mostly-Bernstein concert featuring West Side Story Symphonic Dances, Chichester Psalms, and excerpts from Candide, all in celebration of the 100th anniversary of the composer’s birth.

The Shenandoah Valley Bach Festival is a week-long summer music festival devoted to promoting an appreciation and understanding of the music of Bach and a featured composer, country, era or people. Concerts take place on the campus of Eastern Mennonite University and at Asbury United Methodist Church in downtown Harrisonburg.

Three featured concerts with orchestra, soloists, and choir; six chamber music concerts; a Leipzig Service; and open rehearsals infuse the Valley with unequaled musical richness. The Festival, widely recognized for its artistic excellence, has been named the “jewel in Harrisonburg’s crown” by the Virginia Commission for the Arts.

A full list of artists and repertoire is available at www.svbachfestival.org.