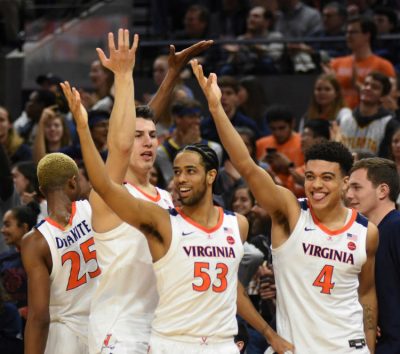 Kihei Clark drained a pair of free throws with eight seconds left, after being fouled, inexplicably, by Harlond Beverly, and #22 Virginia held on for a 46-44 win at Miami Wednesday night.

That one is the only loss of the season for the ‘Hoos in a game decided by three or less.

Seven wins in the 10-1 stretch have been by three or less.

It has been nice knowing all you folks.

And we’re nowhere near done with the oddities in this game story.

Jay Huff. You watched it. He scored the first 17 points for Virginia.

The first Virginia points from a person not named Jay Huff came on a three by Clark with 3:20 left in the first half.

Huff, oddly, because this game was as odd as odd can get, was done scoring at this stage.

Miami point guard Chris Lykes had 14 in the first half himself, and the score at the break was 24-23 Virginia, with those two guys going off, and everybody else earning their card with the bricklayers’ union.

Lykes would finish with 16, after checking out at the 12:11 mark, after colliding with a teammate on a Braxton Key layup, and suffering an eye laceration that would keep him out the rest of the night.

Virginia led 33-30 after the Key layup, and as you know, from having seen the final score, it was a slog from there.

UVA’s best look in the final two was a wide-open Huff three from the right corner that missed with 44 seconds left.

The ‘Hoos D forced a missed Beverly driving layup with 16 seconds left, and Sam Waardenburg, after an offensive rebound, had his shot blocked by Key.

Clark picked up the carom, then dribbled upcourt, ostensibly trying to set up a game-winning shot.

It will be interesting to learn after posting this recap what in the blue hell Beverly was thinking fouling Clark at midcourt, but it appeared at first glance that he must have thought that his team was down one, and needed to foul to stop the clock.

It was just a one-and-one, but Clark made them both.

That’s how it went down. In a season of weird games, this one was by far the weirdest.

In part because Huff ended up the leading scorer, with 17, the first 17, with nine rebounds.

Mamadi Diakite had 14 points and 10 rebounds for the Cavaliers.

Tomas Woldetensae, the kid who’d averaged 13.3 points per game over an eight-game stretch at the start of the recent hot streak, played 37 minutes, but didn’t score, and only shot the ball three times.

Woldetensae is 1-of-16 from the floor in his last three.

I was worried that he might have the flu after the last one, but he played 37 tonight, so, he’s just being ineffective.

Lykes, aforementioned, had 16 for Miami, which got nothing of note from anyone else.

Virginia hosts Louisville on Saturday in JPJ with an outside shot at a share of the ACC regular-season title on the line.

You just watched it tonight.