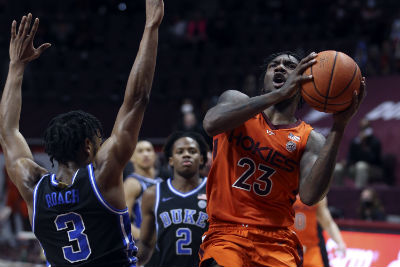 Mike Young has himself a good-looking squad down there in Blacksburg.

“Let’s not beat around the bush. We’ve got a pretty good team. I think we’ve got a chance to be really good,” Young said after the 74-67 win in Cassell Coliseum, and on the ACC Network, Tuesday night.

A Matthew Hurt three cut the deficit to one, 56-55, with 13:12 to go, culminating a stretch that had Hurt making two threes and a pretty stepback two.

Cue Keve Aluma, the Wofford transfer, who followed Young to Blacksburg, and has become the go-to guy for his old and current coach this season.

Aluma scored on a stickback, then converted an and-one, to give Tech some breathing room, and a nifty post move pushed the margin back to nine, 68-59, with 6:10 left.

The Hokies had to endure a four-minute-plus scoreless stretch, but their own defense bailed them out.

A pair of Jeremy Roach free throws made it 68-64 Tech at the 2:34 mark, but that would be as close as the Blue Devils would get.

Duke missed its next five shots, getting a throwaway three at the buzzer from Roach to close out the scoring.

“I saw a level of poise,” Young said afterward. “I didn’t want to call a timeout there when Duke took off on us in the second half. Part of that was by design. I wanted to see us figure it out and fight through it.”

Tyrece Radford had 18 points to lead Virginia Tech. Aluma had 17 and a team-best plus/minus of +10.

“Mike’s team knows who they are. Their substitution patterns were great. They aren’t the only team ahead of us in that regard, where we are still finding out about our team,” Duke coach Mike Krzyzewski said.

“We learned a lot tonight on how hard an ACC top-level game is. You have to be in the game for 40 minutes, and that is a learning experience. We really haven’t been in a game like that in conference,” Krzyzewski said.