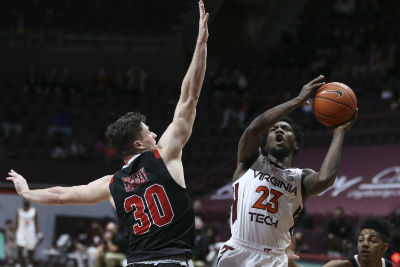 Tyrece Radford goes up for a jumper against the defense of Sean Conway. Photo courtesy Virginia Tech Athletics.

A 13-0 VMI run put the Keydets ahead of #16 Virginia Tech with 11:37 to go, but the Hokies eventually gained control with a gritty defensive effort in the final minutes on their way to a 64-57 win Thursday night in Cassell Coliseum.

The Keydets (2-2) would hold the Hokies scoreless for the next 6:17, taking the lead on a Trey Bonham free throw with 12:01 to go, and extending it to three on a Bonham layup 24 seconds later.

A Hunter Cattoor three with 11:14 left tied the game at 39, but VMI continued with its impressive play, still leading 45-41 inside of the 8-minute TV timeout.

The Hokies took the lead for good on a Wabissa Bede jumper with 6:20 to go, but the Keydets hung around into the final minute, closing the margin to four, at 59-55, on a three by Greg Parham with 48 seconds left, before an Aluma dunk-and-one put the game out of reach.

Aluma led Virginia Tech with 17 points on the night while Tyrece Radford poured in 13. Bede (11) and Justyn Mutts (10) also finished in double figures.

“I thought we were quicker on our feet. We had a couple of nice interior passes throughout the game. I thought our team was engaged, and our team was energized. Anytime I leave with a win, I’ll take it,” Tech coach Mike Young said.

Parham had 12 points, junior center Jake Stephens ended up with 11 and Bonham registered 10.

“Credit to Virginia Tech. They figured out how to win down the stretch,” VMI coach Dan Earl said. “I’m proud of our guys for fighting and clawing and scrapping. The game got down to the last 5-6 minutes, or winning time, and they turned it up a notch. We gave up a few and-ones, gave up a 50-50 ball, and had a few big turnovers, and they were able to pull it out.”