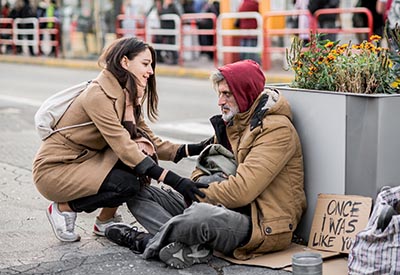 New York City is experiencing a homelessness crisis unlike any in recent history.

The numbers are dire. According to the Coalition for the Homeless, rates of homelessness in New York now approach the levels of the Great Depression, when far more Americans were out of work (as a percentage of the population. Its data shows nearly 60,000 homeless individuals and nearly 13,000 homeless families with some 19,000 homeless children in municipal shelters as of August 2020.

Those numbers represent an increase of 56 percent since 2010. And the pandemic is making the situation worse. Moreover, many homeless individuals fall through the cracks because they’re not consistently housed in municipal shelters. Instead, they stay with friends or family members, invisible to the system.

What can be done about this sobering state of affairs — not just in New York City, but in other places experiencing a rise in homelessness?

A recent article in Vents Magazine offers a solution. Titled “V1 Church Donates $300,000 Worth of Gifts to NYC-Based Shelters in Last Three Years,” it describes the success of one New York City faith organization in attacking the seemingly intractable problem of homelessness in the nation’s largest city and the impressive results the organization has achieved with limited resources.

The secret to V1 Church’s success in fighting homelessness in New York City lies in its new model for helping the communities it serves. Much of the credit for that new model goes to Pastor Mike Signorelli, the reformed atheist who co-founded and now leads the multi-location church.

But there’s more to the story, in a good way. A deeper look at the organization’s approach to helping the homeless holds many lessons for other organizations hoping to do the same in their communities. More than that, it’s an inspiration for individuals from all faith backgrounds (and none at all) who’d like to do good works on their own.

If you’re one of these folks, or you belong to a faith organization contemplating new and better ways to give back, keep reading. You’ll want to learn more about the 15 things V1 Church did differently to help homeless shelters in New York City — and what they mean for you.

1. It never wavered from its commitment to the less fortunate

V1 Church has always been committed to serving the less fortunate. That sounds like a simple proposition, but we all know simple things have a way of becoming more complicated in reality. Under Pastor Signorelli’s guidance, the organization resolved to be different — to continue serving the less fortunate, no matter what. This resolve proved invaluable this year, in the teeth of a pandemic that drastically worsened the situation for homeless people in New York City.

2. It found creative ways to continue giving back in a pandemic

About that pandemic: While some faith organizations hunkered down and turned inward, V1 Church doubled down on its efforts to give back this year. Much of what it was able to accomplish in the pandemic came thanks to its Impact Team, a group that gives back wherever and whenever they can. The Impact Team’s work at homeless shelters across the New York City area has resulted in the delivery of thousands of meals and other forms of aid when they were needed most.

3. It understood the simple power of spirituality

The congregation understands the simple power of spirituality. This has been true since the very beginning, before the church even had a name. It’s a key part of Signorelli’s own story of converting from atheism to faith.

Signorelli explained to Vents Magazine that his epiphany about the simple power of spirituality came during a futurist conference. One of the speakers, a preacher, gave a talk about the growing importance of spirituality in the modern world and its even greater likely importance in the future.

“At the last session of the conference, the preacher talked about how the greatest need for the future of humanity will be spirituality,” he told the magazine. “It made me realize that not only I but everyone around me is desperate for meaning, and we can find that through faith.”

Signorelli has applied this simple realization to everything he does, including community engagement and good works. Today, the church is much bigger than Signorelli himself, but the principles that unite them remain the same.

4. It set forth ‘generosity’ as a core value

Church members are encouraged to give generously to the institution. That’s standard practice for faith organizations everywhere. After all, churches rely on donations to keep the lights on.

What makes V1 Church’s philosophy of giving different is its expansiveness. Here, generosity isn’t measured only by what you give at service. It’s measured by what you do between services and how much of yourself you’re willing to pour back into the community. That’s a powerful proposition, one that has resulted in a sustained explosion of giving over the years.

5. It abandoned its fear

The church’s congregation is made up of ordinary people with ordinary occupations. But they’re capable of extraordinary things. How is this possible?

One reason is clear: They’ve worked to abandon fear and banish shame. They’re wholly and fully committed to living the truth of the world as they see it. Part of that truth, of course, is the reality that many here on Earth need assistance to get by. And that’s where the giving that defines the congregation comes into play.

6. It focused on what mattered most to the congregation and community

Just as the V1 Church team and congregation never lost sight of what mattered most in the pandemic, they remain steadfast in their belief that decency prevail throughout the community. That’s why the Impact Team and everyday members of the congregation invest so much effort in initiatives like Operation Holiday Impact, which seeks to make the holidays more bearable for the less fortunate. It goes without saying that this belief informs their work with homeless shelters, as well.

7. It put forth a joyful public presence

It only makes sense that a group of joyful souls who’ve abandoned fear and bashfulness would create a joyful public presence wherever they go. In the context of serving the homeless in New York City, that means the members of V1 Church who’ve chosen to give back are regular fixtures at soup kitchens, shelters, and other places where people experiencing homelessness congregate. They never let the world forget their presence.

8. It embraced technology and new ways of connecting

Like most congregations, V1 Church went all-online when the pandemic hit. But that didn’t stop its members from connecting and celebrating virtually. If anything, the transition created a new sense of purpose and resolve. Now, more than ever, they know their gifts are needed by the less fortunate members of their community, and they’re proud to find new ways to share them.

9. They lived by a practical, impactful message

Pastor Signorelli inspires his congregants to live simply but impactfully. The message they take into the world is one of hope and joy: Yes, the world is an imperfect place, but together we can make it better. That’s an inspiring lesson for all of us, not least those who may rely or come to rely on the generosity of others from time to time.

10. It’s drawn from all corners of the community

The congregation is as diverse and talented as the broader community from which it draws. In the largest city in the United States and one of the great cities of the world, it’s only natural that a church devoted to making a difference in the world would assemble the very best folks to do it. And it doesn’t hurt that the congregants doing these good works can connect on a personal level with those they serve. They’re not parachuting in from afar and leaving when their shift is over.

11. It developed and grew a talented pastoral care team

The church’s pastoral care team is highly capable and utterly compassionate in its mission to serve the congregation. More than that, the team is built to inspire congregants to take the church’s message into the community. With their support, the organization has become a nurturing environment for those who’d like to give back regularly and to their fullest ability but aren’t quite sure where to start. Every faith organization could take a lesson from what V1 Church’s pastoral care team has accomplished with limited resources.

12. It cut down barriers between faith and good works

V1 Church has blurred, if not eliminated, the distinction between faith and good works. In this church, you don’t have to choose between weekly worship or giving back to the community. You can do both; indeed, you’re expected to do both. But it’s not a chore or obligation to anticipate with dread — it’s a joyful duty in which everyone can partake, regardless of their talents or resources.

13. It established multiple locations to be closer to those they serve

The church has been blessed to be able to establish multiple centers of worship in and around the communities they serve. While the church’s Queens location is closest to the municipal New York City shelters served by the congregation, the need for good works doesn’t simply disappear as one heads east. The organization’s two Long Island locations are centers of inspiration, service, and community support in their own right.

14. It resolved to never stop pioneering

Pastor Signorelli talks often about the need for a pioneering spirit in people of faith, and V1 Church has lived up to his message over the years. Today, the proud congregants of the church continue to find new ways to innovate and persevere amid the new and mystifying challenges of the present time. No one knows for sure what tomorrow will bring, but one thing is just about certain: the church and its congregation will be there to meet the moment.

15. They refused to give up

Relentlessness, commitment, perseverance. These are familiar themes for anyone who knows anything about V1 Church. If you take one lesson away from our study of the most innovative church in greater New York, let it be this: Those who refuse to be discouraged tend to win the day. And that’s wonderful news for the countless homeless people who’ve been helped by its congregants.

You can step up, too

Are you inspired by what V1 Church has been able to achieve in serving the homeless folks of New York City? Are you eager to do good works in your own community?

Rest assured, you can. And you don’t need to join up with a faith group to make your impact felt. (Although you’d be well within your rights to do so, and surely they’d be happy to have you.)

No, the secret to making such an impact lies in the model that Pastor Signorelli and his team have developed over the years. It’s an impressive model, one with few comparisons elsewhere in the United States. But it’s not magical. It can be reproduced easily under the right conditions — conditions that you and your family, and anyone else in your life eager to help the less fortunate, can find right in your own backyard.

We all see what’s going on in the world. We all feel bad about it. And we all — each and every one of us — have the power to do something about it. Let’s move from talk to action and commit to following in the footsteps of V1 Church’s members. The world could use more people like them.