The No. 10 Virginia baseball team concluded pool play at the 2017 ACC Baseball Championship with a resounding 10-2 win over No. 14 Clemson Friday afternoon at Jim Patterson Stadium on the campus of the University of Louisville. The No. 4 seed in the tournament, Virginia (42-14) finished 1-1 in its pool while fifth-seeded Clemson (39-19) went 0-2. Duke won Pool D with a 2-0 record and advanced to the semifinals Saturday. 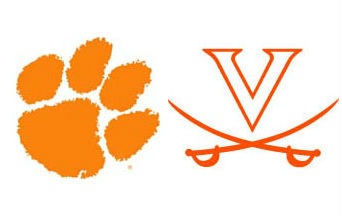 Virginia scored eight runs in the first inning to bolt to a huge early lead. It matched the Cavaliers’ most runs in any inning this season (sixth inning against Rutgers on Feb. 26, second inning against Miami on May 14).

The Cavaliers racked up 15 hits, including nine in the big first inning, as all nine starters recorded at least one hit. Ernie Clement (Jr., Rochester, N.Y.) went 3-for-4 and scored twice, while Cameron Simmons (So., Royersford, Pa.) hit a three-run homer in a 2-for-4 effort. Adam Haseley (Jr., Windermere, Fla.) and Justin Novak (Jr., Tokyo, Japan) also had two hits apiece. Clemson finished with six hits.

UVA starter Daniel Lynch (So., Henrico, Va.) worked seven strong innings, giving up just a first-inning run as well as five hits and a walk. Lynch (7-4) struck out a pair in earning the win. Clemson starter Pat Krall (8-3) did not record an out as he gave up six straight hits and six runs to begin the ballgame.

Clemson wasted little time scoring in the first. Chase Pinder drew a leadoff walk, moved to third on a Reed Rohlman single and scored on a Seth Beer grounder.

UVA exploded in its half of the first, sending a dozen batters to the plate in an eight-run inning in which nine of the first 10 batters recorded hits. The first six batters reached base via hits in knocking Krall from the game. UVA started with four straight singles, including RBI hits from Haseley and Pavin Smith (Jr., Jupiter, Fla.). Robbie Coman (Gr., Lake Worth, Fla.) doubled home a run before Simmons launched a long three-run blast to left field, his eighth homer of the year.

Reliever Alex Eubanks came on and got an out before UVA continued the onslaught with back-to-back doubles from Novak and Andy Weber (So., Aurora, Ohio) before Clement singled home the final run of the inning.

UVA added a run in the fifth as Simmons hit a one-out double and scored on a throwing error from catcher Kyle Wilkie following a Caleb Knight (Jr., Checotah, Okla.) strikeout on a ball in the dirt.

Virginia added a final tally in the eighth inning as Clement hustled home from third base on Smith’s short fly ball into right field that was caught by the second baseman. Weston Jackson hit a solo homer in the ninth inning for the Tigers’ second run.

Virginia now awaits its NCAA tournament fate. The 16 host sites are set to be announced at approximately 8:30 p.m. Sunday. The field of 64 for the tournament will be unveiled at noon Monday during the selection show on ESPN2.