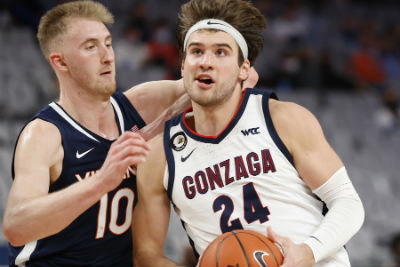 Corey Kispert was 9-of-13 from three. Four of those came in the first eight minutes, setting the tone for #1 Gonzaga in what turned into a 98-75 win over #16 Virginia.

So, so much for coach Tony Bennett, his staff and team to work on from this one.

It’s one thing when a guy is banking threes like Carsen Edwards was in the Elite Eight game in 2019.

Kispert was able to pose, Jordan-esque, emphasizing his follow-through, on several of his makes.

Huff (nine points, six rebounds, three blocks) only got 14 minutes because of foul trouble – two early fouls limiting him in the first half, then he picked up his fourth with 14:17 to go, and he only played 1:47 the rest of the way.

The lack of quality practice time – not just due to the recent 10-day COVID-19 break, but really from when the guys got on Grounds back in August on – was most telling in the utter confusion on the back end of screens.

Gonzaga (7-0) went 12-of-14 on shots at the rim in the second half alone, and way too many of those were simple bunnies without a defender even in the block/charge circle.

The game started out at a breakneck pace. Gonzaga had already recorded 24 possessions in the opening 12:35, which would translate to a 76-possession pace for the game – which happened to be the average tempo for the Bulldogs (yes, their official nickname) coming in.

Keep that in mind when you consider how bad this beatdown was.

Gonzaga had 98 points on 66 friggin’ possessions.

Kihei Clark had six turnovers – three in the first 10 minutes, two of those in the first three minutes, those early two helping set the tone as much as the Kispert makes from three.

Clark, otherwise, played his ass off – finishing with a team-high 19 points on 7-of-14 shooting and four assists in 33 minutes.

Bennett went with freshman point guard Reece Beekman in the starting backcourt alongside Clark, ostensibly to beef up the ball-handling, though, no, didn’t work – Beekman had three turnovers, so the point guards had nine of the season-high 15 on the day.

It was the D where things were, surprisingly, lacking.

You could put an asterisk beside the 10-of-20 shooting from three – as mentioned above, Kispert was 9-of-13 of that.

It wasn’t tempo – Gonzaga had a modest 12-7 edge in fast-break points.

It wasn’t the offensive boards – StatBroadcast.com had that a 10-10 draw.

It came down to execution, or lack thereof.

Gonzaga ran its offense, got open looks for its three-point shooter, who made nine of them, only missed four, and when the defense got Kispert-conscious, that opened up the middle for Timme.

Credit to Gonzaga for effort and execution.

You knew going in that this is what Gonzaga was going to do.

Now you know what you need to work on.

This is a good thing.