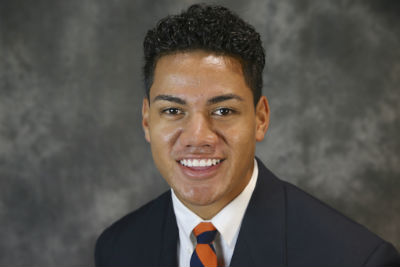 Sophomore Wayne Taulapapa is atop the depth chart at tailback for UVA heading into the Cavaliers’ season opener at Pitt.

The 5’9”, 210-pounder had come out of spring as the #1 tailback, and through the summer proved himself to be the “most trustworthy and the most versatile” of the available options, coach Bronco Mendenhall said Monday.

“Others will be capable and will play and the production might shift in the game to where we’re wondering how did that just happen. It’s very difficult to replicate a game in fall camp. To this point, what we have listed there is factual, it’s fair, and it’s where we stand,” Mendenhall said.

Taulapapa played in seven games as a freshman in 2018, entirely on special teams, recording one tackle.

Juniors P.K. Kier and Lamont Atkins are listed as the backups at tailback on the two-deep released by UVA on Monday.

The backs will have to account for the loss of two-year starter Jordan Ellis, who ran for 1,037 yards and 10 touchdowns in 2018.

The starter at center is sophomore Olusegun Oluwatimi, an Air Force transfer. Backing him up is sophomore Tyler Fannin, who missed 2018 due to injury.