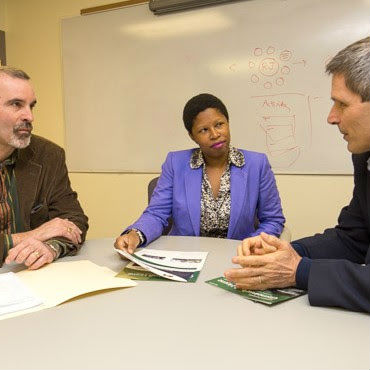 Eastern Mennonite University’s Center for Justice and Peacebuilding has been invited to join the Kellogg Foundation’s national initiative for truth, racial healing and transformation. Professors Carl Stauffer (left) and Johonna Turner, as well the center’s executive director Daryl Byler, are involved in working groups that will determine the format of the long-term project, which will include commissions and healing events around the United States with the goal of addressing racial inequities. (Photo by Andrew Strack)

Eastern Mennonite University’s Center for Justice and Peacebuilding has been invited to partner with the W.K. Kellogg Foundation in a new initiative aimed at truth, racial healing and transformation in the United States.

The goal of the multi-year project, which has garnered significant pledges of financial and moral support from a number of prominent organizations, is “to address and transform present inequities linked to historic and contemporary beliefs in racial hierarchy.”

More importantly, this movement – called the Truth, Racial Healing and Transformation (TRHT) initiative – comes when polling data demonstrates that for the first time, a majority of white citizens acknowledge that more needs to be done to eliminate racism and to elevate black Americans, and Americans of other races, to equal status with whites. The percentage of white Americans who think race relations are fairly good has dropped significantly since 2008, according to Gallup.

“At CJP, we’ve been working towards the goal of racial reconciliation and healing for many years,” says Executive Director Daryl Byler. “Social change movements are successful when they combine grass-roots ownership, effective leadership, adequate resources and the ‘right moment’ in history.  The Kellogg-led effort appears to have all these ingredients. We are thrilled to be part of this enterprise.”

Coming To The Table, a CJP affiliate focused on racial healing by bringing together descendants of slaves and slave owners, is also a partner. Another group with CJP connections among the partners is Restorative Justice for Oakland Youth (RJOY), led by Fania Davis, who will join the Summer Peacebuilding Institute faculty for this first time this summer.

More than 70 partners have been named, only three of which are linked to institutions of higher education: CJP, the Northeastern School of Journalism and the William Winter Institute for Racial Reconciliation at University of Mississippi.

The initiative “aligns well with EMU’s mission and ethos,” says Provost Fred Kniss. “We have a number of faculty with scholarly and practical experience who will be able to contribute their expertise, and we have a critical mass of undergraduate and graduate students who will also be energized by these goals.”

The initiative is currently collecting input through working groups. CJP staff and faculty involved in this first stage include Byler, Professor Johonna Turner.and Professor Carl Stauffer, who is also co-director of the Zehr Institute for Restorative Justice.

“Kellogg leadership are building consensus and collecting input in the design stage with working groups that address broad topics,” says Byler. “The input will determine the shape and location of the healing events and the hearings that will enable voices and perspectives in local communities to be heard.”

Jayne Docherty, CJP program director, anticipates more of the center’s faculty and staff will be involved as specific activities and conversations take shape. “I anticipate that CJP will be involved on several levels, both locally but also in other work we’re involved in with restorative justice and trauma resilience around the country.”

CJP’s connection to the Kellogg Foundation has deep roots. It began in 2006 with a successful grant application that aided in the formation of Coming To The Table. Lately, CJP has been working with Kellogg in a restorative justice project in urban schools, which again strengthened ties.

“Kellogg is looking at the big picture and has found some significant partners to aid in their goal of long-term systemic change. They’re also looking to engage with much of the ongoing truth and healing work that is going on already around the country,” said Byler.

One of those efforts, which pre-dates the Kellogg partnership, is being explored in February at a meeting which will bring together representatives from the three co-sponsors, RJOY, Coming To The Table and the Center for Justice and Peacebuilding. Davis, the founder of RJOY and an Alabama native, has been delving into the concept of a national truth and reconciliation process for years; in fact, she’ll co-teach a course at the Summer Peacebuilding Institute on the topic with Stauffer, who worked on the South African truth and reconciliation process after apartheid.

The vice president of Kellogg’s TRHT commission, Gail Christopher, is slated to attend.